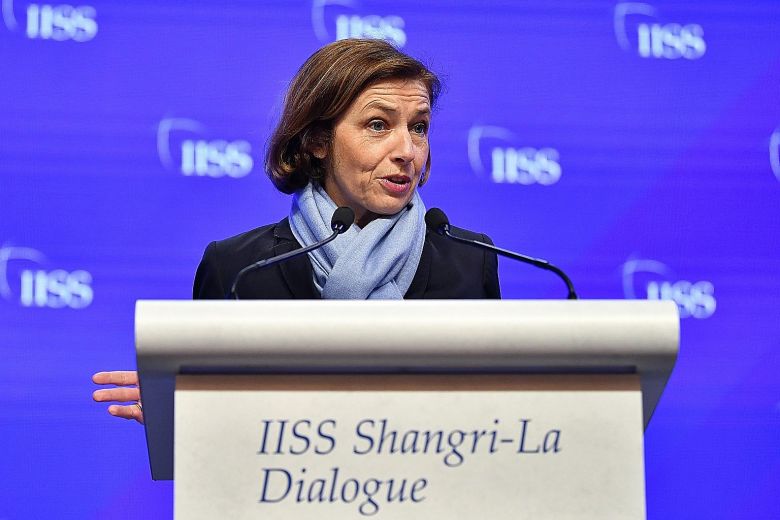 I am delighted to be here with you this morning. I would like to thank IISS for the fantastic quality of whatever they do, and our hosts of course – Singapore is a key strategic partner for France, as highlighted during Prime minister Lee’s visit to France last July as guest of honour of President macron for the French national Day. It is a particular pleasure to share this stage with my friends Mat Sabu, whom I met here last year for the first time, and Penny Mordaunt. It must be a measure of the Shangri La’s attraction that I meet Penny for the first time here, 10.000 kilometers away from our respective homes.

I have to say, though, that I did not come alone. Last year, we had a bit of competition with your predecessor, Penny, as to which of our two countries sent more frigates to the indopacific area. Gavin Williamson argued a bit over, whether it was two or three per year. So today I upped my game and I came with a full carrier strike group, complete with aircraft carrier, destroyers, oiler, 20 Rafale, Hawkeye and helicopters, hoping that you would be kind enough not to reciprocate. Joke aside, this mighty instrument of power projection, berthed only a few miles from here, means a lot to me. A year ago, President Macron delivered an important speech at Garden Island in Australia, and made the case for the emergence of an indopacific axis, with France, India and Australia as its backbone, but with a strong cooperation with other countries in the region, and with Europeans of course. What better incarnation of such a project than this carrier strike group? As she sailed away from France, she participated in the campaign to eradicate ISIS in Syria, where our British and Australian friends are key partners alongside the US. Once in the Indian Ocean, she took part in a series of advanced exercises with the Indian navy, and did the same a few days ago with the Australian and the Japanese navy. She will participate in the coming days to joint exercises with the Singaporean navy and air force. In this deployment, the carrier strike group will have integrated Danish, British, American, Italian, Australian and Portuguese vessels, and officers from many other countries. This, to me, is policy in action. India, Australia, those two great democratic nations have just renewed their leaderships by electing the incumbent - something my government is looking at with no small measure of self-interest. Our relationships with the newly elected leaders are already very strong, and we will do our utmost to strengthen them even further.

This cooperation is more necessary than ever given Asia’s evolving security order and its challenges. It takes no Kissinger to see the building blocks of a global confrontation taking shape here in Asia. We see it in trade wars, tech wars, currency wars, wars of words, and the occasional brush between two aircraft or two ships. This is only the beginning. So what is the position of France in all this? Mat, one of your predecessors once joked to me that France and the US were nice with their talk of freedom of navigation and rules-based order ; but the bottom line was : the westerners came, and then went, back to the safety of Toulon or Honolulu, « while we », he said, « are stuck here, with our bulky neighbours ». I challenged this assertion. France is not going anywhere, because we are part of the region. We have territories here, we have more than 1,6 million inhabitants, several islands with different statutes, vast exclusive economic zones, and the responsibility that goes with the territory. The evolving security order affects us too.

We have just completed our Indopacific strategy, and its assessment of the dynamics in the region is not particularly uplifting. I mentioned the growing strategic competition. Multilateralism is receding, and its core values, like sovereign equality, non-interference, respect of borders, are on the wane. Speed, tech, and reach, are reducing the geostrategic space. Djibouti illustrates this: with its balcony on the Indian Ocean, it has become a sort of Babylon-on-the-Horn, a place of French, Chinese, American, Japanese, , German, and even Italian accents,. A reduced space is a space where frictions will happen faster and more often. But the Indopacific is also an area of harder military capabilities, of unpredictability, where coercion can take place without drawn swords.

Faced with this reality, we have identified five main priorities in our action.

First, we will protect our sovereign interests, our nationals, our territories, and our exclusive economic zone in the region. Our forces will be ready to face any kind of threats, whether from terrorism, organized crime, and any attempts to undermine French sovereignty. Some of these threats are straightforward, some are insidious: we will confront them anyway. We will organize our presence, our pre-positioned forces, our temporary deployments, to ensure a robust defence of our interests. It will rest on 5 military commands, 3 sovereign bases, and more than 7000 military personnel in the area. We will not only keep aggressors at bay; we will also disrupt traffickers. In 2018 only, our forces seized 15 tons of drugs in the Indian Ocean - enough to dope all the region’s sharks into oblivion.

Second, we will contribute to regional stability through our military and security cooperation. I mentioned India and Australia as partners of choice obviously, but we have other key partners in the region, and I would like to single out in particular Malaysia. Mat, last time I visited your country, I was fascinated by the extent of our cooperation, with your magnificent fleet of A400Ms and submarines, and all the things our military do together. France supports the building of a regional security architecture and the centrality of ASEAN. We have taken steps to work closer to ASEAN different structures, in particular the ADMM+ where France would bring its operational know-how.

Third, we will preserve, with our partners, free and open access to maritime lines of communication. (This is normally where I wag the elephant in the room). What is at stake goes beyond the prosperity of Europe and the preservation of trade lanes that are vital to the world. This is a question of principle. Where rules are no longer the boundary of ambition, what security can there be for smaller states in the region? What is the meaning of sovereign equality, that cardinal principle of the UN? As for us, we will go about this issue in our own, steady, non-confrontational, but obstinate way. We will continue to sail more than twice a year in the South China Sea. There will be objections, there will be dubious manoeuvres at sea. But we will not be intimidated into accepting any fait accompli, because what international law condemns, how could we condone? We will also call for all those who share this view to join in, as have several European officers, and indeed British helicopters on our ships, when we sailed through the South China Sea.

Fourth, we will contribute to strategic stability through multilateral action. Think nuclear proliferation in particular. One way to solve this is to fall in love with Kim Jong Un and engage in summitry. As for us, we support love among nations and are in favour of diplomatic efforts ; we just hope they will lead to complete, verifiable, irreversible nuclear disarmament. Our contribution, however, will be in the implementation of sanctions; we have for instance deployed important air assets in Japan and the Republic of Korea as well as a frigate, to monitor the nightly rendez-vous of tankers doing illegal trans-shipments.

Five, and last, we will draw the lessons of the incredible accumulation of catastrophic climate events that happened recently in the region. Our forces were often involved in them, whether to help, as we did by deploying an A400M to Indonesia during a typhoon last year, or to be helped, as when our Rafale aircraft had to be diverted toward the same welcoming Indonesia, this year, because of terrible weather. These should send alarm bells. Smaller island states are at a serious risk, and armed forces have capabilities that can help. We should join forces. France will be launching a programme to improve our anticipation and mitigation of risks to the environment, and we hope to cooperate with as many partners as possible.

Having vastly exceeded my time I will now conclude. I have tried to outline some of the region’s challenges, and how my country fits in the picture. History is replete with big power competition. The Punic Wars started when Rome and Carthage fought over an island in a strait. What ensued was 100 years of war followed by 500 years of domination. That was 2000 years ago, and the island was called Sicily. The slowly assembling parts of a tragedy do not mean that the tragedy is inevitable, but pretending to ignore what looms does not help. As for us, we believe we can chart our own way, avoid confrontation, and carry a distinctive voice. We believe that we can rally our friends, and all the people of goodwill who want to join us in the defence of the rule-based international system. And with this, in a peaceful, multilateral, but robust way, we hope to accompany the vast rebalancing that is taking place in the region.