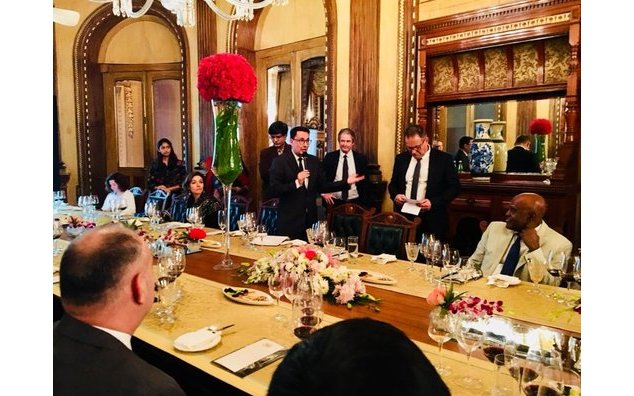 The Ambassador of France to India, H.E. Mr Alexandre Ziegler, and Mr Michel Vernejoul, Vice President of International Relations of Bordeaux Metropole, were pleased to jointly host an exclusive evening for tasting the finest collection of wines offered by this Bordeaux association in the historic setting of the Taj Falaknuma, Hyderabad, on Wednesday, 7th February, 2018.

Representatives of the winemakers of the various grand crus being presented on this occasion provided insights into the specificities of the selected wines as well as their pairing with both Indian and international cuisines. Aimed at bringing closer France’s best wine producers and India’s wine professionals and aficionados, the event is an initiative of Bordeaux Metropole, organised with the support of the Alliance française of Hyderabad and Consulate General of France in Bengaluru as part of the ongoing third edition of Bonjour India 2017-2018.

Members of the Conseil des Grands Crus Classés en 1855 met decision makers, think-tanks, importers and hotels keen on gaining greater knowledge on wine and its growing popularity in India. These professional meetings were held as part of the five-year cooperation agreement signed in 2015 between Bordeaux Métropole and the State of Telangana. The soirée was thus graced by high-ranking officials from the Government of Telangana, illustrating anew the sister-city cooperation between Hyderabad and the French city of Bordeaux.

Speaking at the event, Ambassador Alexandre Ziegler said, “I am delighted to co-host this wine tasting soirée with the President of the Conseil des Grands Crus Classés en 1855, featuring the most renowned winemakers from the world capital of fine wines and my hometown, Bordeaux. I hope that this initiative of Bordeaux Metropole authorities, who have built a promising partnership with the Government of Telangana, will enhance India’s discerning oenophiles’ appreciation France’s matchless wines.”

The 4 properties that presented their wines on the occasion of this visit:

The 1855 Classification of Médoc and Sauternes wines was published on April 18, 1855 on the occasion of the Universal Exposition in Paris, following the request of Emperor Napoleon III to industry brokers to draw up a ranking of the most famous wines. It holds a unique place in the history of wine not only because it was the first, but also because it is the most enduring. Although it is a veritable monument of the wine world, the 1855 Classification is not frozen in time. Its members take their commitment to its high standards very seriously, carrying out extensive research to further improve their already superlative wines, adopting the most modern techniques and rigorously reevaluating their properties on a regular basis. Thanks to their efforts, the Classification remains to this day the ultimate reference for Bordeaux enthusiasts worldwide. The principle of the crus classés (“classified growths”) perfectly illustrates the synthesis of a terroir’s typical characteristics and dedicated human intervention over many generations to ensure quality. Established shortly after the Classification came into being, the Conseil des Grands Crus Classés en 1855 is a professional organization that upholds and protects the 1855 Classification and its prestigious image through joint economic and promotional activities.

On 13th October 2015, the signing of a framework cooperation agreement formalised relations between Bordeaux Métropole and the State of Telangana, and more particularly the City of Hyderabad. This cooperation focuses on major themes, including urban public services, such as urban mobility, water and waste management. Also on the anvil are aeronautics, biotechnology and digital technology, as well as exchanges to strengthen academic, cultural and tourism connections.

The third edition of Bonjour India 2017-18 is a four-month-long mega voyage across India celebrating Indo-French partnership as well as shaping the next decade of people-to-people contacts between the two countries. From November 2017 to February 2018, Bonjour India is presenting 100 projects in 33 cities across 20 states and union territories. Bonjour India is providing a platform for enduring partnerships across the themes of Smart Citizen, High Mobility, Go Green.

Bonjour India is unprecedented given the ambitious scale of its partnership with India. People at the forefront of their fields are sharing their inspiring journeys as they change society through innovation and creativity.

At events collaboratively organised across cities and disciplines, amid performances, debates, seminars and exhibitions, all audiences will find something that captures their imagination.