On the occasion of the 71st Cannes International Film Festival, the Embassy of France in India and UniFrance, in charge of promoting French films abroad, will organize India Day on Friday, 11th May, 2018, at Terrasse UniFrance, Cannes. This will mark the first of the regular professional meetings bringing together the French and Indian film industries, offering them opportunities to collaborate on common projects as well as augment the sales and distribution of Indian and French films.

Among celebrities present at India Day will be actor-director Nandita Das for her biopic, Manto, and actor Nawazuddin Siddiqui playing the title role; and Ken Scott, director of the Indo-French co-production, The Extraordinary Journey of the Fakir, along with actor Dhanush, who makes his international debut in this film.

Adding to India’s presence at Cannes for various categories will be director Rohena Gera for her debut feature film, Sir, Michelin-star chef Vikas Khanna for his directorial debut, The Last Color, and young thespian Antara Rao for her short film, Asthi.

The Hon’ble Minister for Information and Broadcasting, Smt Smriti Irani, will be in Cannes on 9th May to inaugurate the India Pavilion, organised in partnership with the Federation of Indian Chambers of Commerce and Industry (FICCI) to provide a platform for stakeholders to market their films. The Embassy of France in India, in association with the Ministry and FICCI will facilitate working sessions on the same day with Smt Smriti Irani and French organizations such as UniFrance, FilmFrance (promotion and organization of foreign film shootings in France), CNC (co-production, post-production, distribution support and legal expertise), and TVFI (promotion and facilitation of television programmes abroad).

Looking ahead to the festival, the Ambassador of France to India, H.E. Mr Alexandre Ziegler said, “Two months after Prime Minister Narendra Modi and President Emmanuel Macron called for strengthening Indo-French collaboration in films, I welcome India’s remarkable participation in various segments of the Cannes Film Festival. I am sure that India Day will pave the way for greater Indo-French co-productions, given the two countries’ common history and love for cinema.”

Manto, a biographical drama by filmmaker Nandita Das, will compete in the Un Certain Regard category at the Cannes Film Festival. Starring the prolific actor Nawazuddin Siddiqui as Sa’adat Hasan Manto, the eponymous movie traces the life of the author between 1946-1950 when he had to decide between staying back in India and emigrating to Lahore. The Un Certain Regard category screens 20 films that narrate unique stories in unconventional ways. With one prize winner announced in this category every year, it runs in parallel to the Palme d’Or.

Sir, Rohena Gera’s debut feature film selected to premiere at the Critics’ Week sidewalk at the Cannes Film Festival, narrates the star-crossed romance between a maid and a middle-class man. This Tillotama Shome-starrer is competing for the Grand Prix Nespresso award in the Sidebar with six other movies. Critics’ Week is the oldest sidebar at the Cannes Film Festival which focuses on emerging talent by selecting just seven movies from across the world for the Grand Prix Nespresso award. This year, four out of seven movies in this category have been directed by women, a significant increase since last year.

The Extraordinary Journey of The Fakir

The Extraordinary Journey of The Fakir, directed by Ken Scott, is inspired by a novel by Romain Puertolas titled The Extraordinary Journey of the Fakir Who Got Trapped in an Ikea Wardrobe. Starring Dhanush and Bérénice Bejo, this Indo-French co-produced comedy-adventure narrates the story of a swindler, Ajatashatru, who goes on a mission to Paris.

The Last Color, is Chef Vikas Khanna’s directorial debut based on his own book. It portrays the tradition of prohibiting widows from playing Holi in Vrindavan and celebrates the Supreme Court’s order against this. The film’s teaser will be unveiled at the Cannes film festival (May 8-19).

Asthi, young thespian Antara Rao’s 14-minute-long film, written by her sister and directed by her father, has been shortlisted for Court Métrage (Short Film Corner) at Cannes Film Festival 2018. The movie revolves around Meera’s inability to perform the rituals after her mother’s cremation although she undertakes the journey. The Cannes Court Métrage offers aspiring filmmakers the opportunity to present their short movies. 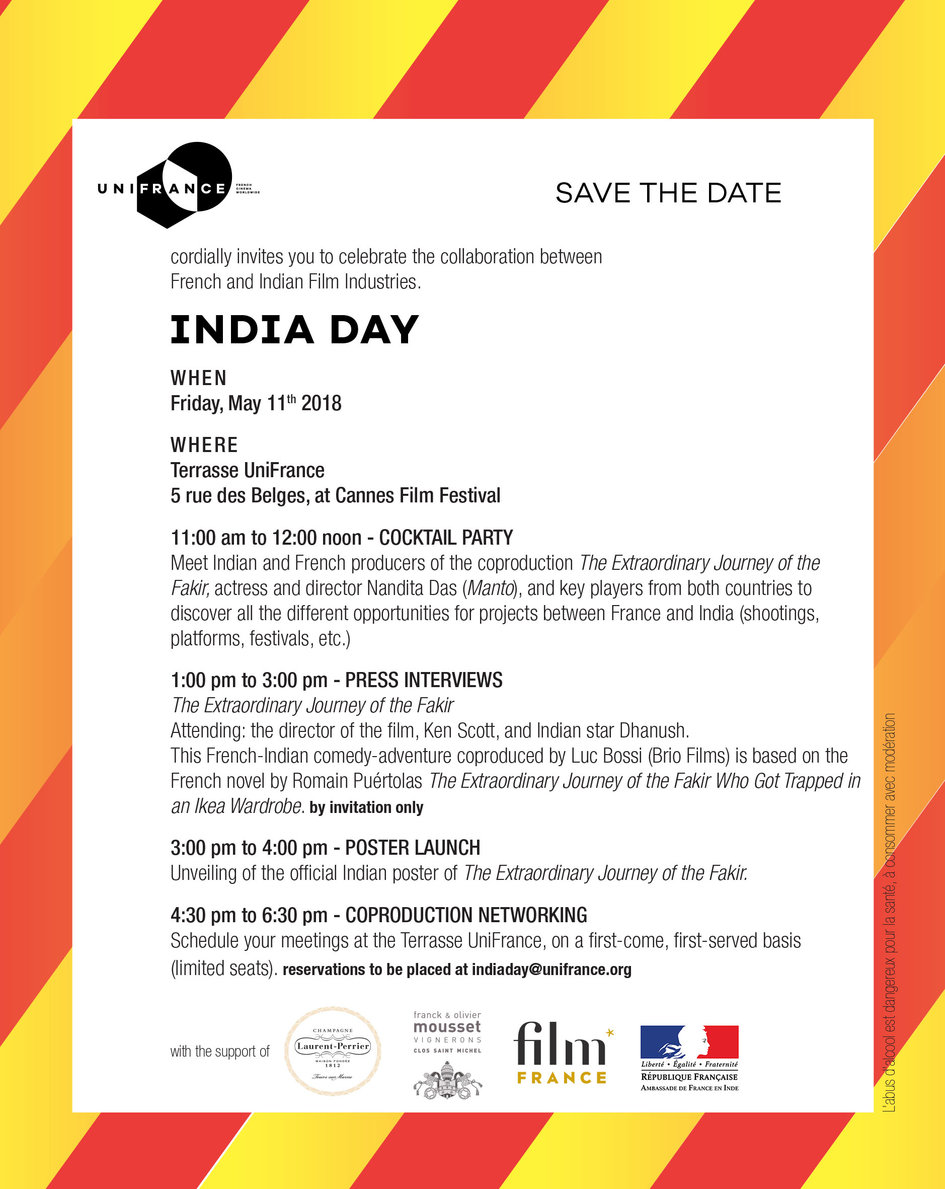