Signing of a collaboration agreement between ESRF and India

This agreement reinforces the long-standing collaboration between the ESRF and the Indian scientific community in the field of synchrotron radiation that has been increasing steadily over recent years. 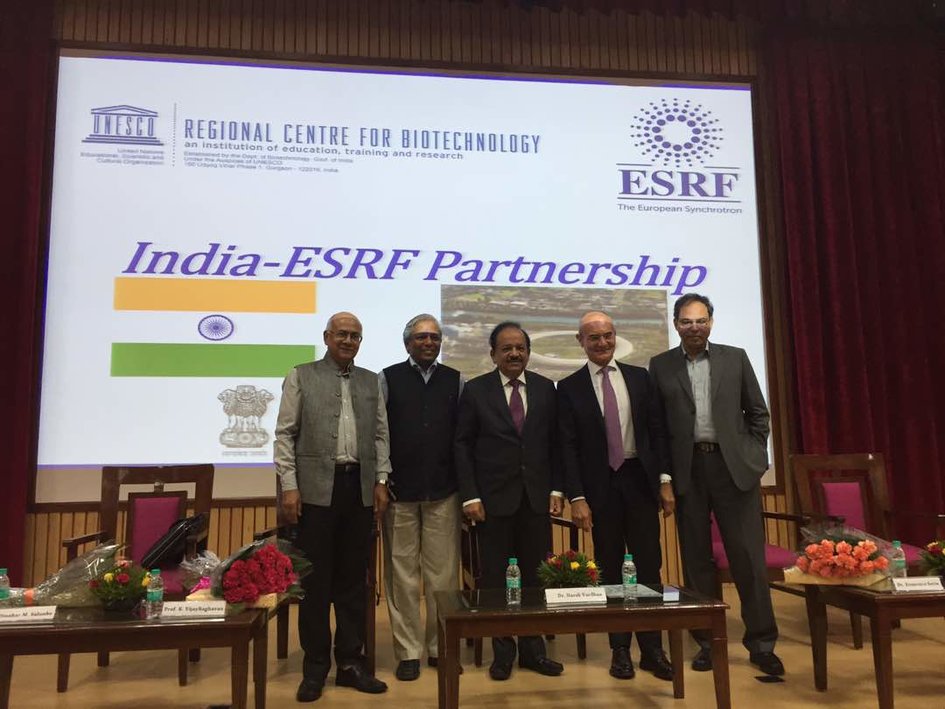 Signing of a collaboration agreement between ESRF and India

Dr. Francesco Sette, Director General, ESRF (European Synchrotron Radiation Facility based in Grenoble, France), and Prof. Sudhanshu Vrati, Executive Director, Regional Centre for Biotechnology (RCB), officially signed a three-year collaboration agreement in the presence of Dr. Harsh Vardhan, Minister of Science & Technology. With this agreement signed, with the backing of the Government of India’s Department of Biotechnology, India becomes the 22nd country joining the ESRF at a level of participation of 0.66%.

This agreement represents a decisive milestone in the long-standing and strong collaboration between the ESRF and the Indian scientific community. It will provide access to the ESRF for Indian scientists for non-proprietary research, with a focus on structural biology.

The Minister chaired the signing ceremony which was followed by speeches given by Prof. K. Vijay Raghavan, Secretary of the Department of Biotechnology, Prof. Sudhanshu Vrati, Dr. Francesco Sette, Dr. Dinakar M. Salunke, Director of the International Centre for Genetic Engineering & Biotechnology, and by distinguished members of the structural biology community in India.

This agreement reinforces the long-standing collaboration between the ESRF and the Indian scientific community in the field of synchrotron radiation that has been increasing steadily over recent years. In December 2009, the ESRF and India’s National Institute of Immunology (NII) signed a Memorandum of Understanding (MoU), enabling the Indian macromolecular crystallography community to share the use of the ESRF beamline BM14 by the NII, in collaboration with the European Molecular Biology Laboratory (EMBL). This new agreement will give Indian scientists access to the ESRF for non-proprietary research, with a focus on structural biology, at a critical time when the facility is preparing for the launch of a new and revolutionary light source, the Extremely Brilliant Source (EBS), in 2020. The EBS source will enable, with its unprecedented performances, discoveries in living matter and material research to the benefit of human knowledge, and progress in health, environment and innovative technology challenges.

Prof. Sudhanshu Vrati: “I’m confident that this new agreement will lead to exciting new discoveries and nucleate other scientific collaborations between India and Europe.”

Prof. Dinakar Salunke, Director of the International Centre for Genetic Engineering and Biotechnology of New Delhi: “I would like to express my satisfaction for this important step. The ESRF partnership has opened the gates to more challenging problems to be addressed in Biology.”

Dr. Francesco Sette, ESRF Director General: “I’m very pleased and honoured by the decision of India to join the ESRF, and in particular, its forefront structural biology programme. The ESRF community will greatly benefit from the collaboration with the vibrant Indian scientific community.”

H.E. Mr Alexandre Ziegler, Ambassador of France to India: « I warmly congratulate India in becoming the 22nd member of the ESRF. It is a great opportunity for Indian researchers to access a world-class research facility based in Grenoble, France and get a unique exposure to a high-performing and multinational research environment. This agreement will not only contribute to consolidate our long-lasting and fruitful cooperation, but will also open the way to new potential breakthroughs in science.”

The ESRF – the European Synchrotron – is a large scale international research instrument, located in Grenoble, France. The ESRF is the world-leading source of synchrotron X-rays operating 44 beamlines with state-of-the-art instrumentation for imaging and studying the structure of matter at the atomic and nanometric scale in all fields of research. Founded in 1988, the ESRF is a model of European and International cooperation with 22 partner countries. Following the success of the ESRF Upgrade Programme Phase I (180M€ in the period 2009-2015), the ESRF has launched the ESRF-EBS project (Extremely Brilliant Source). EBS represents an investment of 150M€ over the period 2015-2022, and focuses on the construction of a new revolutionary storage ring with unprecedented performances that will allow new perspectives for X-ray science.