Release of Astérix comics in Hindi 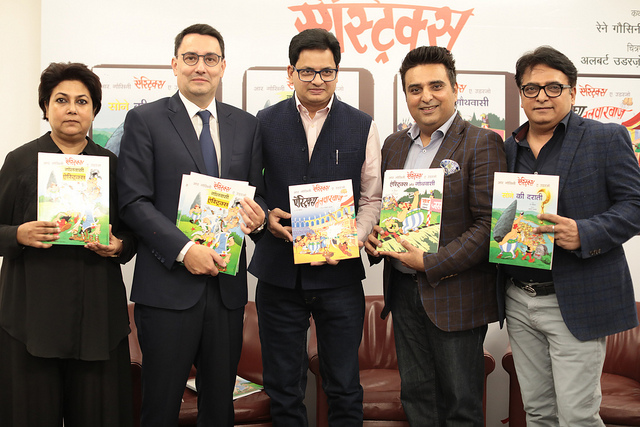 The Ambassador of France to India, H.E. Mr Alexandre Ziegler, and publisher Ajay Mago, today jointly released the first four albums of the Astérix comics series in Hindi at the Residence of France.

Present for the occasion, the co-translators, Dipa Chaudhuri and Puneet Gupta, shared their experience of translating the adventures of Astérix, the internationally popular comic series, from French to Hindi.

Welcoming the publication, Ambassador Alexandre Ziegler said, “It’s an immense pleasure to release the first four Asterix albums in Hindi. Asterix’ strength – apart from the superhuman one he acquires through the druid’s magic potion – is his ability to please and renew his audience, generation after generation. The characters embodying French spirit are timeless and such a part of French heritage. Their stories are an opportunity for readers to get a glimpse of the history of the figures’ country of origin. Making the humour and stories accessible in another language and culture is no mean feat, so I warmly congratulate the translators for taking up this challenge.”

Ajay Mago, Publisher, Om Books International remarked, “I have grown up devouring Astérix comics. In fact, I would wait with bated breath for the subsequent album to be released. And I was amazed at the amount of cultural history that these apparent comics are replete with. Every character has been so carefully crafted. Every dialogue has layers of meanings. It was back then that I had decided that, someday, I would love a Hindi edition of this series. I was in touch with Hachette Livre for over 7 years before they were convinced that we were the right team of professionals to tie up with for the Hindi edition. So I am really delighted that the albums in Hindi are a reality today.”

Astérix comics are amongst the most widely read comic series in the world, and have been translated into over 100 languages. The series first appeared in the Franco-Belgian comics magazine, “Pilote”, on 29 October 1959. It was written by René Goscinny and illustrated by Albert Uderzo. The first four albums—Astérix: Gaulwasi Astérix; Astérix: Sone ki Darati; Astérix: Astérix aur Gawthwasi; Astérix: Astérix Talwarbaz— are now available in Hindi.

Dipa Chaudhuri: With an M.Phil. in French Literature from Université Paris Diderot-Paris 7, Dipa Chaudhuri has been a publishing professional for nearly two decades. Since 2010, she has been Chief Editor, Om Books International, and looks after the fiction and non-fiction publishing lists.

Puneet Gupta: An advertising professional and a producer of audio visuals, Puneet Gupta writes science fiction novels, short stories and humorous poetry in Hindi. A die-hard comics enthusiast since childhood, he has also translated the comic series, Tintin, in Hindi.

OBI has an equally strong and varied children’s publishing programme under its imprint, OmKidz.

Good evening ladies and gentlemen and welcome to the Residence of France.

I am very pleased to release tonight, four albums of the Asterix comics series from the famous French author-illustrator duo, René Goscinny and Albert Uderzo, that have been translated into Hindi by Dipa Chaudhuri, Chief Editor at Om Books International, and Puneet Gupta, translator, author and advertising professional.

Asterix the Gaul, Asterix and the Golden Sickle, Asterix and the Goths and Asterix the Gladiator are a part of this large collection of 33 albums. 60 years have elapsed since this character and his sidekick, Obelix, were introduced and went on to become a part of our lives and the French literary landscape. The Asterix adventures are a representation of France that take us on a historical journey of a Gaul that, having fallen under Roman occupation in the second and first centuries BC, sees the Celtic tribe inhabiting this region valiantly fighting for their independence and keeping their traditions and customs alive.

But Asterix has not remained only on the pages of comic albums. His adventures have also been adapted for animated films as well as live action films. With over 30 million filmgoers having followed their exploits on screen, these films have been major box office successes as well. The series has also been turned into video games, an adventure theme park in Paris, and hundreds of other formats. As many of you may know, Asterix is not “restricted” – so to speak – to its wide French readership, the albums having been translated into many other languages, and now, Hindi.

Asterix is a popular hero for the young and adults alike. In fact, at the time of its publication, the stories reflected the political climate in France. In a caricatured way, with running gags, anachronisms, and the clever use of word play, Asterix addresses more serious subjects such as regional and European identities, cultural heritage or ethnocentrism.

Asterix’ strength – apart from the superhuman one he acquires through the druid’s magic potion – is his ability to please and renew his audiences, generation after generation. The story and the motley characters embodying French spirit are timeless. And it makes me proud that an even wider Indian public now has access to this French literary heritage with these remarkable translations in Hindi. I am sure they will be able to relate to his character who has several traits in common with the popular Indian cartoon character, Chhota Bheem, who derives his strength from eating laddoos and protects his village. The two characters deal with the same subjects of identity and territory in their respective villages.

As much as Astérix is a part of French heritage, it is also a lively means of learning French. It is also an opportunity for students to get a glimpse into the history of the country of the language’s origin.

Talks for the translation of an album and its launch were initiated four years back. It gives me immense pleasure to finally release not one, but four albums from the series today. I understand that the translation of Asterix was not easy, the names of the characters being products of word play with references to French terms. Dipa Chaudhuri and Puneet Gupta have indeed done an exceptional work of contextualising some of these names while staying true to their original meanings.

I thank you all for being here with us tonight, and especially thank Om Books International for making this evening possible. And now, as Chief Vitalstatistix – or – Mukhiya Golmatolix in Hindi – would say, “Let the revels begin!”