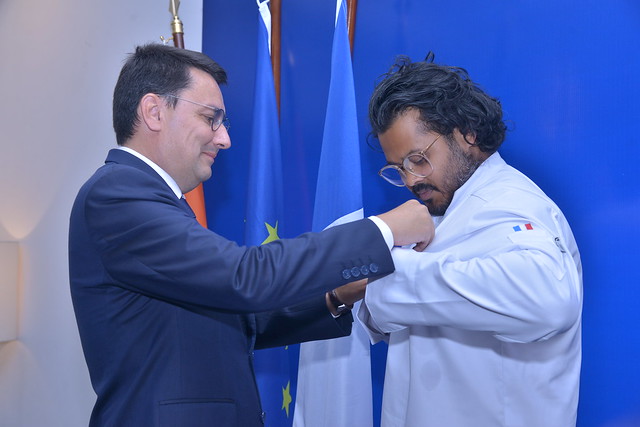 On behalf of the President of the French Republic, the Ambassador of France to India, H.E. Mr Alexandre Ziegler, conferred the distinction of Chevalier de l’Ordre du Mérite Agricole on talented young chef, Priyam Chatterjee.

Priyam Chatterjee is the first Indian chef to be conferred this honour, which comes in recognition of his contribution to reinventing the gastronomic scene in the Indian capital. Having trained under eminent French chefs, he is known to honour French cuisine by revisiting the traditional dishes of his native state, West Bengal. His masterful plating, his eclectic cooking style and his creative dishes draw upon his Bengali roots, the French influence in his life and his love for music and art.

Highlighting his culinary flair, Ambassador Ziegler Alexandre remarked, “Chef Priyam Chatterjee’s appointment as Knight in the Order of Agricultural Merit this evening is befitting in light of the quality and creativity of his unique gourmet cuisine, which infuses the French influences he has imbibed over the years. French gastronomy in India has found its reference in him – one of its ambassadors – which has also led to his selection in this year’s batch of the India-France Club Young Leaders.”

It is a great delight for me to host this ceremony to celebrate your appointment as Knight in the Order of Agricultural Merit this evening.

This national order was established in 1883 - a time when 20 million French men made their living from agriculture, and was second in importance only to the Legion of Honour in the French order of precedence. Also called “the leek”, in reference to the colour scheme of the insignia, this order rewards people who have rendered exceptional services to agriculture, be it in the practice itself, in research and of course in gastronomy!

This is actually the first time that we are celebrating the talent of a young chef at this embassy by conferring this distinction. And it had to be you.

This honour, dear Priyam, recognizes your talent and your commitment to promoting French cuisine.

The first time that I tasted your cuisine, I was astonished that I had not met you earlier. This was at QLA restaurant in March 2018 and you had agreed to promote the Goût de France event, which aims at making French gastronomy better known in the world. It was quite an amazing occasion. I remember that I had originally planned to stay for half an hour for a cross-interview with you; instead, I stayed on for two hours to sample the dishes you had prepared.

Priyam, you like to introduce yourself as the ambassador of French cuisine in Delhi. You most certainly are so, and tonight we applaud your most promising career.

You were born 31 years ago in Kolkata – a city I love – to a Bengali father and a Bangladeshi mother. Quite early in your life, cooking fascinated you – as did the army. But, as you have said yourself, fate decided for you, and you set course for cuisine, a cuisine that you execute in a very artistic and precise manner.

This is, moreover, what characterizes you: precision. It’s there in your dishes as well as in your paintings – because you paint – and in music – because you are a very good rock drummer. And, often, your plating is reminiscent of artworks. One gets a glimpse of your whole personality even before tasting your dishes. Apart from its taste, what is striking in your cuisine is quality and creativity – two qualities that Master Chef Paul Bocuse has always highlighted, and are at the core of French and Indian cuisines.

Your encounter with French cuisine happened quite by chance, but it was the beginning of a love that still animates you today. French cuisine entered quite early in your career, in 2011. You were twenty-two years of age when you underwent rigorous training under Chef Jean-Claude Fugier, who would go on to be your mentor. Very soon, by dint of your talent and long hours of hard work, you progressed and were spotted as a promising chef. And that enabled you to enrich your experience internationally, first in the UAE and then in the Sultanate of Oman, where you contributed to opening the Fauchon Paris café.

Bolstered by this experience, you returned to Delhi to become the head chef first at QLA – which is where we met – and more recently at Rooh.

I will not reveal your forthcoming ambitions, but I think that they are linked to France.

Dear Priyam, French gastronomy in India has found its reference in you, one of its ambassadors, and I hope that you will continue to bear aloft the colours of our country, which suits you very well. You have, in fact, been selected for this year’s batch of the India-France Young Leaders Club, a proof that we have faith in your career. Alongside your Young Leader batch mates – space engineers, architects, businesswomen, to mention but a few – you will spend a week in Paris in November. I’m sure you’ll return with some delicious ideas.

This is the first time that we are awarding an honour to an Indian chef – and about time, too! Because both the French and the Indians share two unique traits: we can talk about food, food and nothing but food over a meal, without getting bored for even a second – and there isn’t a single French or Indian film that doesn’t have a scene featuring a meal.

It is indeed with great pleasure that I will now proceed to confer the insignia of this honour – in French, as required by protocol:

About the Ordre du Mérite Agricole

Instituted in 1883 by then French Minister of Agriculture Jules Méline, the Ordre du Mérite Agricole (Order of Agricultural Merit) is a distinction bestowed by the French Republic for outstanding contributions, among others, to agriculture, agro-food industry and gastronomy, regardless of the nationality of the recipient.

At 30, Chef Priyam Chatterjee is also a musician and artist whose interest in the art and science of food has brought him accolades and adulation. He is currently the head chef at Jaan Restaurant Yacht, France. Prior to this, he was the head chef of Rooh (group of Indian Chef Sujan Sarkar) and Qla in Delhi. He began his rigorous training under Chef Jean-Claude Fugier (from Maison TroisGros) at Park Hyatt Hyderabad, before moving on to Fauchon in Oman. He has also cooked with French Chef Ernest Darren Alford, Michelin-starred chefs, Spanish Koldo Royo, and Italian Matteo Grandi. With a narrative behind every platter that he dishes up, his reinvented Bengali cuisine and his training with French and European chefs have contributed to his experimental gastronomy.

A programme aimed at building an influential advisory network between France and India to promote Indo-French bilateral action, the Club is spearheaded by the Embassy of France in India. Its study trip in France is organised by Campus France and financed by the following companies: EDF, SNCF, Total, Dassault, Naval Groupe, Thales, Vicat.

As a flagbearer of innovative French cuisine, Priyam Chatterjee has carved out a niche for himself in the 2019 batch, along with other notable young leaders, including Sridevi Raghavan, founder of Amelio, a centre providing support to pregnant women who are professionally active; Rohan Ganapathy, who works on innovative solutions for rocket propulsion systems; Ananta Ganjoo, an architect who has worked on leading urbanization and community regeneration projects; Ritesh Agarwal, who launched the Oyo Rooms hotel aggregator network; and Apar Gupta, a lawyer and co-founder of Internet Freedom Foundation.