Speech by the Ambassador of France to India, H.E. Mr Alexandre Ziegler during the conferral of "Knight in the National Order of Merit" on Prajna Chowta and Jean Riotte. 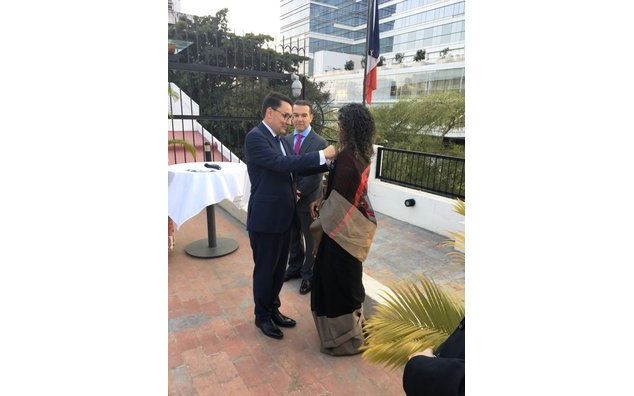 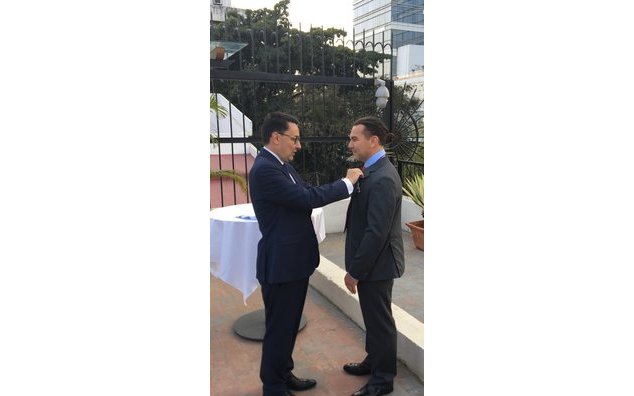 It is an especial honour for me to proceed to conferring the honour of Knight in the National Order of Merit on you here in Bangalore before your near and dear ones and well-wishers.

Through you, it is an essential matter – or should I say, vital matter in the literal sense of the term – that we are celebrating: that of protecting the environment. This is a fight that should be taken up by all of us, collectively, for a development model that enables humankind to live in harmony with Nature, and exploits our natural resources without depleting them.

I also salute your links with France, not just because you have been married to a Frenchman for the past 25 years, but – as we will see – because of your numerous interactions with our country in the course of your life.

Before bestowing this distinction, allow me to mention briefly your trajectory.

It all began in Africa, where you were born and spent your childhood. This African childhood was to imbue you with a taste for vast expanses and respect for Nature.

You later came to India, here in Bangalore, to complete your schooling, then left for London to study at the prestigious School of Oriental and African Studies (SOAS), London University, specializing in Archeology, Anthropology and South Asian politics.

On completing your studies, you left behind the libraries of Western universities to conduct real fieldwork through immersion with the tribal communities in South India’s forests. Here, you came to learn about the age-old practices of capturing and training elephants. You also discovered that this tradition, which contributed to forging India’s identity, is endangered, threatened by the extinction of this species. To set the alarm bells ringing, you and your husband co-directed the film “Hathi” (Hindi for “elephant”), which went on to be screened in France and Canada in 2000, where it won numerous prizes.

That very year, along with other personalities, you founded Aane Mane – the Abode of Elephants – to conduct studies on this animal. The first project, entitled “The Old Elephant Route”, was the first study on the migration of elephants between Burma and India. This study was conducted with the Museum of Natural History of Paris. See, I did say that your ties with France are not limited to your husband!

Gauging the full extent of the tragic situation that threatens this species, you decided to create a sanctuary in the forests of Karnataka in 2002.

In 2010, you published “The Elephant Code Book”, which provides all the techniques for taking care of elephants in captivity, explaining age-old best practices and the results of the latest research. This was the first guide of its kind translated in Kannada.

In 2011, you started using space-domain technology for more in-depth research on Asian elephants. Using GPS collars, you launched ElephanTTrackinG, the first tracking and studying system for these elephants. And you chose French technology for this!

During all these years, you and your husband have also been successful filmmakers with beautiful documentaries such as “The Old Elephant Route”, “Elephas Maximus”, or more recently, “Elephant Blues”.

You have been able to go beyond your academic background as an anthropologist to become a true wildlife activist. But the power of your message lies in this blend of science and passion that is ever-present in your action. You run an NGO, conduct scientific work, raise awareness about an endangered species. You are also an example to uphold for many Indian women, with your ability to permeate the predominantly male domain of mahouts.

I am delighted to confer this award on you and honour your personal life and exemplary career.

The cooperation in which you are involved concerns an essential resource – again a vital one, which is the linking strand of this ceremony: water.

Water is a scientific issue, of course, but it is also an economic, social and, often, a political one, as we’ve recently seen here through the Cauvery water sharing issue. This is therefore an issue that necessitates an overall scientific approach. And this was the mission that you entrusted to the Indo-French Cell for Water Sciences (IFCWS/CEFIRSE), an Indo-French joint research unit located at the superb IISc campus, which is one of the jewels of our scientific partnership.

But, let’s come back to you, dear Jean Riotte.

You and India go back a long way, and it’s a great story.

You studied Geoscience at Louis Pasteur University in Strasbourg, specializing in Geophysics and Geochemistry. Your doctoral thesis focused on a comparative study of river waters of France – specifically the Vosges – Mount Cameroon, and the Himalayas. Yes, India had already begun to appear in your life.

In 2003, you joined the French National Research Institute for Sustainable Development (IRD) first in Toulouse, then in Bangalore in 2005, where you joined the Indo-French Cell for Water Sciences. You worked here for five years during your first stint, then returned to Toulouse for two years, but in 2012 you were back in Bangalore, heading this Indo-French joint research unit on water science since then.

Thenceforth, you have successfully sustained the dynamism as well as the excellence of the research conducted by this cell.

CEFIRSE has entered into innovative partnerships, such as the space data collected by the Indo-French satellite “Megha-Tropiques”, which you yourself use. Under your watch, the Cell has also initiated major projects, such as AICHA – Adaptation of Irrigated Agriculture to Climate Change – financed by CEFIFRA – which will be followed by a second project.

You have also played a decisive role in the establishment of the Indo-French Water Network (IFWN) in 2013, for which you and your team continue to be a driving force.

Apart from numerous research and publications that do you much credit, I would also like to underscore your implication in the training and mobility of Indian and French students – a matter that you know is very close to my heart. Whether they are enrolled in a Master’s or a doctoral programme, the students benefit from an excellent environment conducive to research, thanks to you and CEFIRSE.

Lastly, a word on your personal life: for the past ten years you have been living in India with your spouse and your children. While this may be part of a professional plan, what also lies behind it is the choice of a country that you are quite familiar with, that you love and have been able to make others love. Through your work, you indisputably contribute to consolidating the people-to-people ties and friendship between our two countries.

Dear Prajna Chowta, Dear Jean Riotte, in recognition of your action, the President of the French Republic has appointed you Knight of the National Order of Merit and it is a great honour for me to bestow this distinction on you.