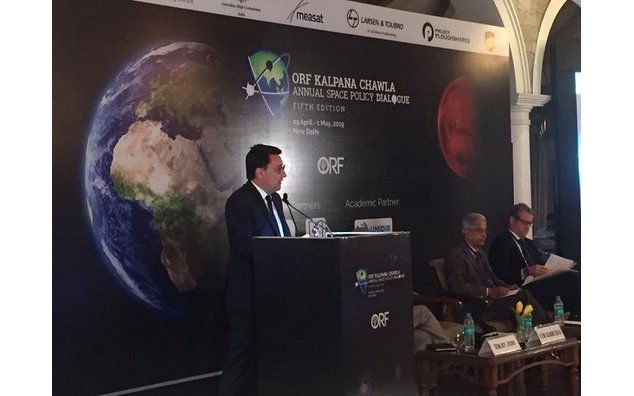 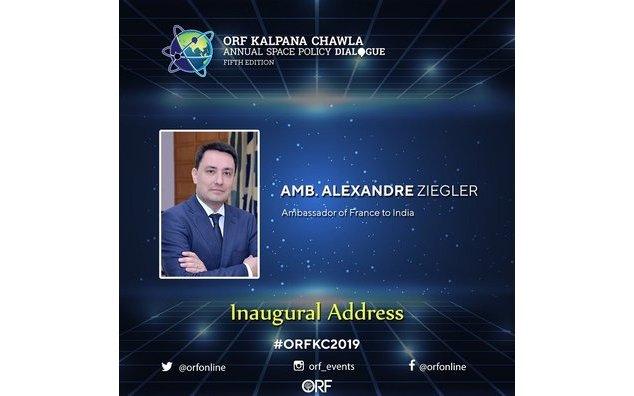 I would like to thank the ORF for inviting me to deliver the inaugural address at the opening of a well-established and much-awaited rendezvous on space in Delhi.

The Indo-French space cooperation has a long history – one spanning almost 60 years. It’s a history that is almost as old as our respective space policies: India and France are, in fact, among the oldest space partners. This was first and foremost a history of people, of solidarity and development of space technology, before becoming a facet of the strategic partnership between our two countries.

I would like to begin with an overview of its main stages, so that from this common past, we may better deliberate on our future.

A cooperation of peoples, I called it, because the personal friendship between Dr Vikram Sarabhai, the father of the Indian space programme, and Jacques Blamont, the first director of the French space agency, CNES, certainly played a role in initiating exchanges between India and France on propulsion technology in the early 1960s.

The first sounding rocket launched in 1963 from Thumba, in Kerala, had already a payload of French design. Still today, all the Indian launchers are fitted with Vikas engines, which is none other than the Ariane Viking engine that Indian engineers have contributed to developing and India has been manufacturing under licence since decades.

This cooperation on propulsion technology went on to become a lasting partnership in space launches. Both our countries acquired the capability of independently launching their satellites at more or less the same time, i.e. the early 1980s. Since then, all the Indian satellites that cannot be put in orbit by the PSLV or the GSLV are launched by Ariane at the French Guiana Space Centre. The GSAT31, launched in February this year, was the 23rd Indian satellite to be launched by Ariane. Similarly, France chose to launch its Spot 6 and Spot 7 satellites on the PSLV.

Moreover, India and France have learned to develop, build and operate satellites together, particularly for climate monitoring.

Two such Indo-French satellites are Megha-Tropiques, which studies the water cycle and energy exchanges in the tropics, and Saral-Altika for studying oceans from space and managing resources. And we’re not stopping here. This fleet of joint satellites dedicated to climate studies will soon be enhanced with the launch of the Oceansat 3-Argos mission in 2020, and the one of infrared observation indo-french satellite, Trishna, in 2024.

The data provided by these satellites help with food security, managing water resources and climate research.

Our space cooperation also extends to human spaceflight and exploration. Because France has always been willing to be by India’s side for meeting the challenges of conquering space. Thus, for India’s project of sending a three astronaut crew to space by 2020, CNES offered its expertise to ISRO in space medicine and will place its infrastructure, such as the MEDES space clinic, at ISRO’s disposal for training future Indian astronauts.

We are also considering with ISRO the possibility of embarking French scientific instruments on board future Indian missions to Mars and Venus.

Lastly, in line with the India-France Joint Vision for Space Cooperation signed on the occasion of President Emmanuel Macron’s State visit in March 2018, we have embarked on increasingly ambitious and strategic cooperation projects. I will cite just one example: developing a constellation of satellites for maritime surveillance in the Indian Ocean, on which CNES and ISRO have been working for many months.

I think it’s no exaggeration to state that this unique and historic partnership has made space cooperation a decisive aspect in the development of both France and India as important space powers and in being recognized as such.

What can we foresee for the future?

I would say: continuity, of course, but also a new ambition, or rather a renewed ambition. As in the past, our bilateral cooperation must be such a force that both our countries may meet today’s space-related challenges in a coordinated and supportive manner.

Space has become essential for our armed forces. The use of space for military purposes is not new, but they have become indispensable for operations. Satellites enable our armed forces to communicate securely, gather intelligence, orient themselves, and precisely guide missiles and assess their impact thereafter.

Space has become essential for the lives of our people, too. In India – perhaps more than elsewhere – the space programmes serves the people. How would we manage to be oriented without navigation satellites, make financial transactions or communicate from a very remote region without communications satellites, forecast tomorrow’s weather without observation satellites? Every day, it is not less than 10 satellites, on average, which accompany and help us in our daily lives.

And yet, this space is vulnerable. Democratising access to space, which enables new players to offer a wider range of services at reduced costs, is something fortunate but is also a challenge. It has been estimated that to the 1500 active satellites existing today, a further 3000 satellites of over 50 kg and 7000 satellites from big constellations will be added over the next 10 years. Accidents may happen, trajectories may overlap, harmful interferences may occur. We must avert risks of collision by regulating this traffic.

Above all, outer-space has become a full-fledged space of confrontation. Like land, sea, air, and cyberspace, space has become the arena of rivalries between major powers. France had described this development in its 2017 strategic review, and our defence minister had given a concrete example when last September, a Russian satellite had come within brushing distance of the Franco-Italian satellite, Athéna-Fidus. Defensive and offensive technologies are being developed with various aims: spying, gaining control, deactivating service, destruction, dissuasion.

That India shared the same observation and desired to act was reflected in Prime Minister Narendra Modi’s announcement of the ASAT anti-satellite missile on 27th March. This test was the Indian response to an assessment of growing threats in outer space and against space assets. France shares this assessment, even if, of course, we must also take into consideration legitimate concerns with regard to preserving the safety of space objects from space debris. In fact, as our satellites today have to avoid almost 600 000 debris of over 1 cm at a speed higher than that of a bullet (7km/second), we know collectively how important it is to mitigate the risks of generating additional debris.

Given this situation, we must act together.

India and France share the same interests and values in outer-space: we wish to maintain the use of outer-space for peaceful purposes. We intend to maintain our freedom of access to space and build a real strategic spatial autonomy; and we therefore refuse to have a destabilising arms race in space.

India and France must protect themselves by developing the capability of detecting and attributing any potential aggressive act.

France pursues a determined policy at the national and European levels by placing its capabilities and services at the disposal of the EU Space Surveillance and Tracking consortium (EU SST), over which CNES has been presiding since 2017.

The building of our respective capabilities can contribute, for the benefit of all, to space traffic surveillance from the ground.

India and France must protect themselves through international law. The Indian Government stated a few weeks ago that they were willing to come to the negotiating table for future space regulations and I suggest that we act together.

It is certainly necessary to reaffirm the full applicability of international law and the United Nations Charter to outer-space. We must all promote responsible behavior.

For this, we must adopt a pragmatic approach, and move out from the debate of form (legally binding treaty vs. “soft law”), which has been ongoing since years to the detriment of content. We must also be inflexible on the effectiveness of the verification system.

France has been proactive on these subjects since 2007: by initiating the European Union Code of Conduct for Outer Space Activities; by contributing in 2013 to the Group of Governmental Experts’ recommendations on Transparency and Confidence Building Measures (TCBM) in outer space; by proposing and participating in deliberations on the long-term sustainability of outer space activities at the Committee on the Peaceful Uses of Outer Space (COPUOS); and offering concrete proposals as part of the Group of Governmental Experts on the Prevention of an Arms Race in Outer Space (PAROS).

I am convinced that India will assume its rightful place for supporting these efforts and initiating proposals.

And I am equally convinced that the future of the longstanding, deep and ambitious space cooperation we’ve built between France and India especially lies in our ability to craft collective answers to the 21st century’s space challenges.

I wish to all of you fruitful discussions during this three-day conference./.