In 2010, the French Centre National de la Recherche Scientifique (CNRS) and the Council of Scientific and Industrial Research (CSIR) created the Indo-French Joint Laboratory for Sustainable Chemistry at Interfaces (JLSCI). This laboratory is co-directed by CNRS-University of Rennes 1 on the French side, and the Indian Institute of Chemical Technology of CSIR (IICT, Hyderabad) on the Indian side.

Recently, Dr. René Grée and Dr. Jhillu Singh Yadav, the two co-founders and former co-directors of this Indo-French laboratory, have both been honoured with awards for their scientific contribution. 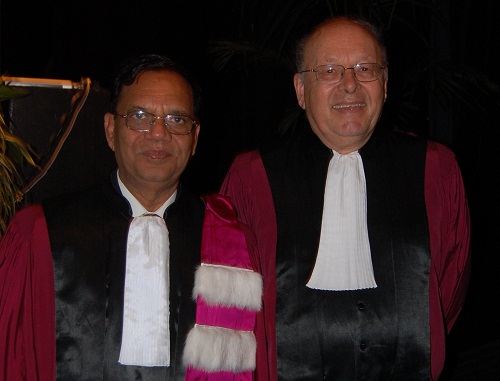 Dr. René Gree, Scientific Director of the LIA, has recently been awarded the title of “Honorary Fellow” by the Chemical Research Society of India (CRSI), and will receive this award in February 2016 in Chandigarh. This is to reward not only his great work and achievements in different fields of chemistry (organic synthesis, bio-organic chemistry, medicinal chemistry), but also to acknowledge him for his strong action in Indo-French scientific cooperation. He is the fourth French scientist who receives this honour, after H. Kagan, J.-M. Lehn (Nobel Prize in Chemistry in 1987) and Marc Fontecave.

Dr. Grée’s interest for India started in January 1998, during a visit to various Indian research institutes in the framework of an exchange between the French Académie des Sciences and the Academy of Indian Sciences. This visit led to two significant results:

Dr. Jhillu Singh Yadav has been awarded with the title of “Doctor Honoris Causa” by the University of Rennes 1 on 3rd April 2015.

Dr. Singh Yadav Jhillu is a world-renowned organic chemist; he made important contributions to the development of new synthetic methodologies and their application for the preparation of bioactive molecules, especially in the agrochemical field and the field of medicine. Also many of the synthetic processes invented in his group have led to 150 patents, successfully transferred to the chemical and pharmaceutical industries. He has published over 1100 articles, guided nearly 200 PhD students and received numerous scientific awards, both in India and abroad.

For nearly twenty years he has established close relations with chemists from the University of Rennes 1.

Indo-French Joint Laboratory for Sustainable Chemistry at Interfaces (JLSCI): achievements at a glance 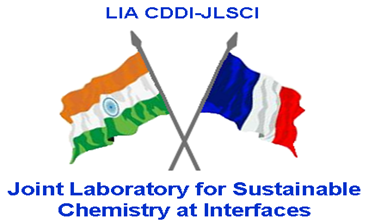 Staff Scientists from Institute for Chemistry in Rennes involved: 20

Students from Institute for Chemistry in Rennes involved: 16

Scientific results presented in many occasions through plenary lectures delivered, or in oral communications and posters.

Very fruitful exchanges have been conducted:

Two joint seminars and one CEFIPRA workshop have been organized together and the Indo-French joint lab participated to several actions supporting the Indo-French cooperation, both in India and France.

Several important awards and special recognitions have been given to Joint Lab members.