India and France discuss the upcoming session of 21st Conference of Parties to United Nations Framework Convention on Climate Change.

A bilateral meeting was held here today between India and France under the leadership of Minister, Environment, Forest & Climate Change, Shri Prakash Javadekar, and Minister of Foreign Affairs, Government of France shri Laurent Fabius to discuss the upcoming session of 21st Conference of Parties (COP-21) to United Nations Framework Convention on Climate Change (UNFCCC) to be held from 30 November 2015 to 11 December 2015 in Paris, France.

The Visiting French Foreign Minister said that India is a very important player in the upcoming climate change negotiations and France expects India to take a leadership role in successful outcome of Paris agreement. He also appreciated India’s efforts towards launching a Global Solar Alliance on 30th November 2015 at Paris.

The leaders of both the delegations held a detailed discussion on various key issues on negotiating table and assured each other of developing key bridging proposals on major issues. They hoped to achieve convergence on all the key issues.

Both leaders agreed to work for an equitable, pragmatic, comprehensive and ambitious agreement based on the principles of Convention of equity and Common but Differentiated Responsibilities and Respective Capabilities (CBDR&RC).

Source of the text: Press Information Bureau, Govt. of India. 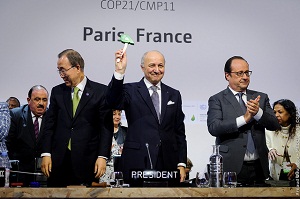