This was the first time that a foreign contingent marched down Rajpath with the Indian Army as part of Republic Day celebrations. 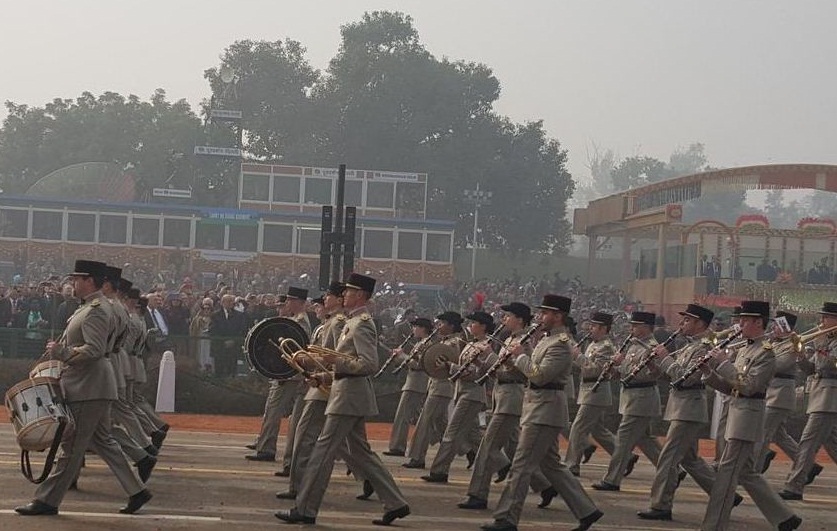 From 6th to 17th January, 56 “Gaillards” from the 35th Infantry participated in the third edition of the Indo-French military exercise, SHAKTI, in the Mahajan Field Firing Range in Rajasthan, along with the 2nd Battalion of the Garhwal Rifles, which fought in France during World War I. The French and the Indian troops were able to share their experience in a wide range of counter-terrorism operations, including in semi-urban conditions, under United Nations mandate.

The 35th Infantry Regiment has a history of old ties with India (see below).

The Music of the Infantry:

Created in 1757 by Royal Decree, the Musical Regiment was stationed in the city of Lyon and, along the years, became part of the local landscape. The band is composed of 50 musicians and the Regiment animates official and formal ceremonies, being an essential element of public relations and a vehicle of communication for the French Army. Being based in Lyon, many of its performances take place in the southeast quarter of France, but it also travels in the rest of mainland France and abroad during numerous international festivals. It has a wide and diverse repertoire.

The 35th Infantry Regiment is one of the oldest active regiments of France. It was created in 1604 by Mr de Némond, a member of the gentry from “Lorraine”, a region in northeast France, who desired to place his men at the service of the king of France, Henri IV. The regiment participated in most of the major campaigns until the French revolution in 1789. It served for three years in the Indian Subcontinent. The 2nd Battalion arrived with the forces of the Admiral Bailiff of Suffren to participate in the capture of Cuddalore and Trincomalee in 1781, with the support of Haidar Ali’s soldiers, against the British forces. The regiment remained in garrison in Cuddalore while continuing fighting the British troops. The soldiers embarked on their journey back to France in 1784.

The French Revolution and the establishment of the First Empire (1804-1815) did not lead to the regiment’s demise. Instead, it participated in all the Napoleonic campaigns and covered itself in glory at Wagram’s battle (1809) against the Austrians, the very first battle written on its regiment’s flag. Its heroic conduct during the Russian campaign earned it a second notch: La Moskova (1812).

After the defeat of Napoleon at Waterloo, under the Restoration (1815-1830) and the Second Empire (1850-1870), the regiments took part in the victorious military siege of Algiers (1830) and of Sebastopol (1855) during the Crimean War against Russia. During the 1870-1871 war between France and Prussia, the 35th marching regiment spearheaded the defence of the city of Belfort, under the command of Colonel Denfert-Rochereau. Despite the French defeat, on 18th, February 1871, the 35th regiment decamped with war honours from the unvanquished city without having lost any battle. A Paris monument in the form of a Lion celebrates the bravery of the Belfort garrison. In 1873, the 35th Regiment garrisoned permanently in Belfort, located between Alsace and Franche-Comté, eastern France, near the Swiss border.

The regiment added four more victories to its banner during the First World War: Alsace-Ourcq (1914), Champagne (1915), Verdun (1916) and Reims in 1918. Ever since, it bears a fourragère in the hues of the Military Medal Award. Part of the prestigious “Division of the Aces”, the regiment fights under the name of the “Ace of Clubs”. In September 1918, it overcame the fortified system of Tahure and contributed to the final victory.

During the interwar period (1918-1939), the regiment continued to train and be seasoned in the Belfort region even as it participated in the “Levant campaign” in Syria and Lebanon.

Swept up in the upheaval of 1940 by the German Nazis, it was reborn four years later from the Resistance movements of Bourgogne and Yonne, and earned its ninth flag inscription: Resistance – Bourgogne 1944. After the German occupation, the marching battalion of the 35th Infantry Regiment and its commandos fought the colonial wars in Indochina, then in Algeria. Back in metropolitan France, re-created in Belfort in 1964, the 35th Infantry Regiment, now mechanized, went back to its traditional garrison and in the 1980’s established itself in the Maud’Huy barracks. The commanding officer of the Regiment between 1910 and 1912, Colonel Maud’Huy was nicknamed “the immortal Colonel of the 35th Regiment” in 1919. He undoubtedly brought in many tactical and commanding skills for the whole regiment.

The regiment is composed today of 1200 troops, divided into 9 companies, at the cutting edge of technology: it has mastered the Infantry Combat warfare with the integrated equipment and liaison (“FELIN” system), is transported on the modern infantry vehicle (“VBCI”), and is operationally commanded through fully digitized battlefield systems. The modern infantryman’s mastery of know-how has been used to the utmost in all recent theatres of operations, whether they are homeland security operations (Vigipirate and Sentinelle) or external ones: Former Yugoslavia (1995), Kosovo (1999), Ivory Coast (2002-2007), Chad, Afghanistan (2010) and Mali, against the Al-Qaeda attempt to take over the country (2013).

More than ever before, the “Burly guys from the Ace of Clubs” are trained and battle-hardened to face tomorrow’s challenges, loyal to the words of Colonel Maud’Huy “Let’s get on with it happily, those in front of you would rather be elsewhere”.

The motto of the Regiment is “tous gaillards, pas d’trainards”, i.e. “all strapping fellows, no dawdlers”.

The presence of the 35th Infantry Regiment “Aquitaine” in India:

After the treaty of Paris in 1763, formally ending the seven-year war between France and Great Britain in the North American theatre, a new campaign was conducted by France with Indian rulers. France had entered the American Revolutionary War in 1778, and Britain declared war on the Dutch Republic in late 1780 when the Dutch refused to stop trading with the French and the Americans. The British had rapidly gained control over most French and Dutch outposts in India when news of these events reached India, spawning the Second Anglo-Mysore War in the process. The French admiral, the Bailiff of Suffren, was dispatched on a mission to provide military assistance to French colonies in India, leading a powerful fleet of five ships of the line, seven transports, and a corvette to escort the transports from Brest in March 1781. The “Aquitaine” regiment was on board the fleet, with its 2nd Battalion and 3000 men. In late June 1781, the 2nd battalion crossed the Cape of Good Hope and halted at Ile de France (old name of Mauritius Island), which it left on 7th December for travelling to Pondicherry.

After a naval combat on 20th February in north Ceylon (battle of Sadras), Admiral de Suffren (Pierre-André de Suffren, 1729-1788) succeeded in landing his troops at Portonuevo (now Parangipettai) on the Coromandel Coast, where they captured Cuddalore with the backing of 200 Indian sepoys of the Mysore kingdom.

On 30th August, the 2nd Battalion of Aquitaine participated in the taking of Trincomalee, and, a few days later, it formed the Cuddalore garrison, which the British besieged in June 1783. Though the fortified town was properly organized, the Aquitaine regiment was the only professional troops at the command of Count de Bussy (Charles Joseph Patissier de Bussy-Castelnay, 1720-1785). Throughout the siege, the two regiments outdid each other in courage and discipline. On 13th June, Aquitaine vigorously repulsed an attack by General Stuart (Charles Stuart, 1758-1828) and killed 300 enemies. On the 25th, the garrison launched a counter-offensive, fraying an exit conducted under the Marquis of Crillon (Louis Alexandre Pierre Nolasque des Balbi de Bertons, Marquis of Crillon, commanded Aquitaine from 1764 to 1784), Colonel of Aquitaine, and penetrated right into the enemy fortifications.

“This one yielded first, and the French, swept up by excessive enthusiasm, went too far from the fortified town and were cut off. A fierce battle ensued; the garrison, after prodigious deeds of valour, managed to return to the fortified town, but by then it had lost more than 200 men, and Mr Crillon was trapped in the clutches of the British.”

After this battle, the equally exhausted two camps maintained a ceasefire. On 27th August 1783, a British frigate bore news that peace had been concluded. Under the Treaty of Versailles, France regained its honour, which had taken a beating in the 1763 Paris Treaty, and recovered the trading posts of India. The 2nd Battalion of Aquitaine stayed back a further year in Pondicherry, then embarked on its journey back on 3rd August and 6th September 1784. It reached Lorient on 6th July 1785 and rejoined the 1st Battalion in Mézières in September.