France’s solidarity mission pools the resources of the French government, over 50 French companies active in India, and the Indo-French Chamber of Commerce and Industry. It also benefits from the support of the European Union Civil Protection Mechanism. 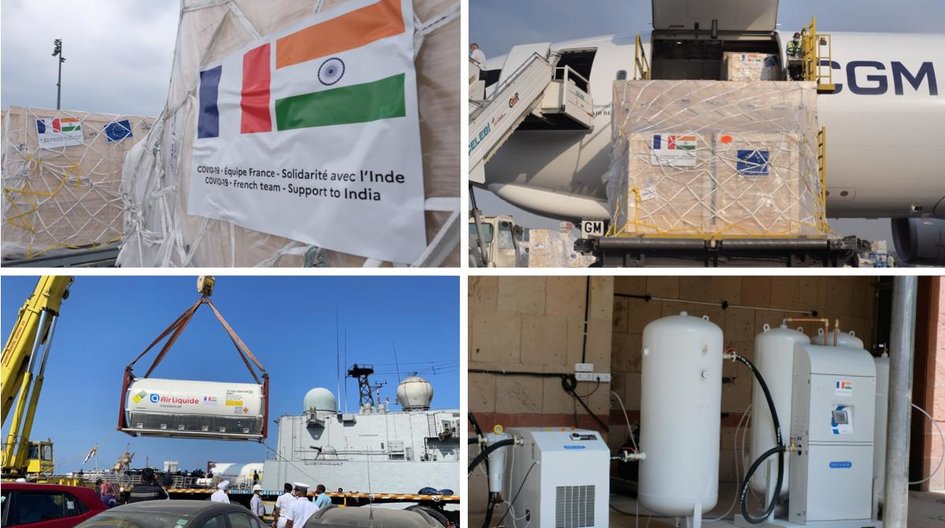 At the request of President Emmanuel Macron, France is bringing in additional support to India to continue fighting the second wave together. Several shipments are underway, which will double the support already provided so far. Overall, this is the largest solidarity operation that France has carried out since the beginning of the pandemic. It reflects the long-standing, two-way solidarity between France and India, which lies at the heart of our strategic partnership.

France and India have set up an oxygen bridge across the Indian Ocean to bring several rotations of liquid oxygen donated by French multinational Air Liquide. The containers are filled in Qatar, shipped to India by the Indian Navy, and then brought back empty by the Indian Air Force for refilling. In the last three weeks, 180 tons of liquid oxygen have already reached Indian hospitals through this bridge. The rotations are now being extended until the end of June, which will enable the delivery of several hundred tons of oxygen in total.

Moreover, France will deliver at least twice as many oxygen generators plants as the 8 already delivered early May. A special cargo flight with 10 units will reach India mid-June and another flight will follow. Each of these French-made, high capacity plants produces 24,000 litres of oxygen per hour non-stop and can make a 250-bed Indian hospital oxygen aatmanirbhar for a dozen years. Indeed, France’s support aims to bring both immediate relief and long-term capacities.

Finally, several hundred concentrators as well as high-grade ventilators will reach India in the coming days.

The Ambassador of France to India, H.E. Mr Emmanuel Lenain, said: “As discussed between President Macron and Prime Minister Modi in their May 26 call, France is doubling its support to India against the pandemic. It shows the solidarity of the French people, who have not forgotten that India helped us when France faced its first wave. There cannot be global victory against the virus without India. Together, we can show the way of international cooperation against the pandemic and the need for a multilateral response.”

France’s solidarity mission pools the resources of the French government, over 50 French companies active in India, and the Indo-French Chamber of Commerce and Industry. It also benefits from the support of the European Union Civil Protection Mechanism.

In addition, gestures of solidarity have poured in from French individuals, NGOs, private companies and French regions. In total, the combined support amounts to more than 55 crore rupees.