The French government’s strong reforms over the past 3 years and growing foreign investor confidence, especially from Indian investors, have enabled France to be ranked first among FDI destinations in Europe. 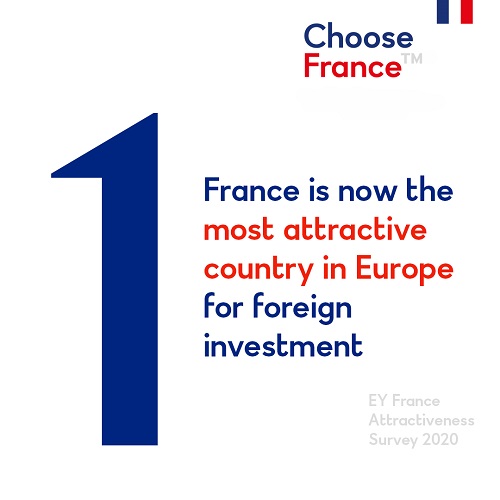 This follows the publication last week of the EY European Attractiveness Survey, which highlighted France as the most attractive country for foreign investors in Europe. According to both reports, France is an increasingly attractive investment location, with a total of 1,468 investment projects in 2019, up 11% compared with 2018, creating or maintaining 39,542 jobs (up 30% compared with 2018). 52% of these project decisions were investments at new sites, 25% were made in manufacturing activities, 11% in R&D and engineering projects, while 37 projects were linked to global European HQs.

Behind these outstanding results of 2019 are the French economy’s resilience and the vast programme of “pro-business” reforms undertaken by the French government since the election of President Emmanuel Macron and to simplify and modernize the French economy. Brexit has also led to a change in foreign investors that had earlier chosen the United Kingdom as a European hub. Therefore, some companies are moving their European HQ to the Continent; major financial groups that have decided to relocate their operations from London to Paris include the European Banking Authority and the American insurance business Chubb.

Indian investors, aware of France’s new position, have significantly increased their investment in France. In 2019, 18 Indian companies decided to invest/re-invest in France, creating or maintaining two times more jobs than in 2018, bringing the total number of Indian companies in France to more than 120, with a global employment level of 8,000 jobs.

H.E. Mr Emmanuel Lenain, the Ambassador of France to India, stated: “I am proud to see increasing Indian investments in France, and impressed by their value addition as they often involve decision-making centres, production/manufacturing operations and logistics. The strong presence of Indian businessmen at major events in France shows how attractive France is for India. The participation of a dozen Indian CEOs during the visit of the French President to Reunion Island on October 23, 2019 and the participation of seven eminent Indian CEOs at Choose France, on January 20, 2020 at Versailles bear witness to this. The French government’s decisive reforms over the past 3 years and growing foreign investor confidence – particularly from India – have enabled France to rank as the top FDI destination in Europe.”

“The diversity of France’s territories continues to drive their attractiveness among Indian investors: Paris region received four projects, while Auvergne-Rhône-Alpes (Lyon) and Provence-Alpes-Côte d’Azur attracted three projects each. Investments were mainly made in the software and IT services sector, while the pharmaceuticals/biotechnologies sector was responsible for nearly 30% of jobs generated by Indian investment”, added Mr Christophe Commeau, Trade & Investment Commissioner for India, Acting Executive Director for Business France in South Asia.

Audrey Lucbernet, Head of Invest in France Department - Business France in India, highlighted three Indian success stories in France respectively from a start-up, a mid-size company and a big group which benefited from a soft landing in France by Business France:

These investment projects played an essential role in France’s attractiveness and contributed to make France the most attractive country in Europe for the first time in 2019.

More than a confirmation, France’s attractiveness is a real statement, showcasing the solidity of its economic fundamentals on which the post Covid-19 recovery plan will be able to rely, with a decisive shift towards a carbon-neutral industry in a business-minded environment and a renewed international and European-level playing field.

Business France is the national agency supporting the international development of the French economy, responsible for fostering export growth by French businesses, as well as promoting and facilitating international investment in France. It promotes France’s companies, business image and nationwide attractiveness as an investment location, and runs the VIE international internship programme. Business France has 1,500 personnel, in France and 64 countries across the world, who work with a network of public- and private-sector partners.

Since January 2019, as part of the reform of the state support system for exports, Business France has given private partners responsibility for supporting French SMEs and mid-size companies in the following markets: Belgium, Hungary, Morocco, Norway, the Philippines and Singapore.