On 21st June 2013, Mr Jean-Marc Séré-Charlet, Minister Counsellor, and Mr Rodolphe Monnet, Counsellor, undertook a field trip to review the community-based rehabilitation projects of the NGO Anchal, to which the Embassy had contributed 15,000 euros last December.

Anchal’s action focuses on eight slums (15,000 persons) in the Jhilmil industrial zone in a northeast suburb of Delhi. 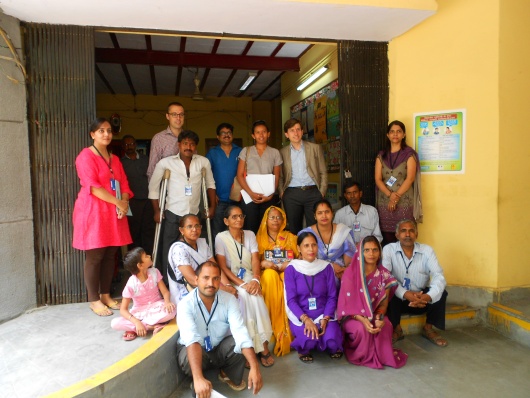 © Embassy of France in India

Its mission of social inclusion of children with disabilities in deprived urban areas has been implemented with the technical support of Handicap International since 2008. Its aim is to impart specialised education to children with disabilities (through a healthcare centre and volunteers for care at domicile), raising awareness on the rights of persons with disabilities, facilitating access to government services, and promoting inclusive education. This project is supported by the Embassy as part of its child welfare cooperation action in India.

After interactions with the Anchal director, Mr Sanjeev Sheel, the staff and the Hanicap International project coordinator regarding the technical aspects of the project, the Embassy diplomats met the parents accompanying their children during treatment and physiotherapy sessions. Project volunteers, who are often persons with disabilities or parents of children with disabilities who had themselves benefited from this project and wish to sensitise their respective community members (fellow slum dwellers), explained what they did on a daily basis and what drove their commitment. They also took the diplomats to the house of a “Ranjeev Camp” beneficiary family.

Mr Séré-Charlet and Mr Monnet discussed the progress made on the NGO’s various activities and how the Embassy’s grant had been put to use. In December 2012, two new communities were included in the project. Among other actions, 1000 persons with disabilities were identified, 60 enrolled in the support programme, an additional 60 children admitted to the specialised education centre, 60 medical staff given special training, a partnership with a public school established for access to inclusive education for the children, and a dozen awareness sessions organised on the rights of persons with disabilities. The healthcare centre receives around ten children every day. In all, around 260 children with motor disabilities and 120 children with mental disabilities are cared for.

The partnership with Anchal, an NGO that has distinguished itself by its commitment and the calibre of its social inclusion work among the most deprived, and renowned French NGO Handicap International is exemplary.