The “2018 Annual Report: Foreign investment in France”, which was released at a press conference held earlier this month at the French Ministry for Economy and Finance, is a testimony to foreign investors’ renewed confidence in France as a business destination. The report was unveiled by Mr Bruno Le Maire, Minister for Economy and Finance, Mr Christophe Lecourtier, CEO of Business France, and Mr Pascal Cagni, Chairman of Business France and Ambassador for International Investment.

A total of 1,323 investment decisions in France in 2018 – at an average of 25 decisions per week – created or maintained 30,302 jobs. Investments at new sites increased by 14% in 2018, with 741 new decisions, thus representing more than half (56%) of total investments. This increase in investment in new sites reflects France’s popularity and attractiveness. There were 500 investments that involved the expansion of existing operations, thereby generating 15,588 jobs in 2018.

In 2018, Indian projects often involved decision-making centres (59% of projects; 53% of jobs) and production/manufacturing operations (18% of projects; 34% of jobs). Investments were mainly made in the software and IT services sector (24% of projects; 30% of jobs), and the machinery and mechanical equipment sector (12% of projects; 21% of jobs).

Business France, together with its French regional partners, helped secure major new Indian investments like Samvardhana Motherson Group, which invested €201 million for the acquisition of Reydel Automotive and Rahman Group. Thereafter, it acquired French safety footwear key player, Lemaître Sécurité SAS, in 2007, and is now reinvesting in the Grand Est region through the construction of its first 4.0 production facility.

Trade between France and India continues to expand: French companies have today more than 550 Indian subsidiaries (with more local establishments that cover the entire territory) and currently employ approximately 360,000 people, for a cumulative turnover of € 12.1 billion.

To strengthen trade and investment links between French and Indian companies, Business France organizes a major annual Indo-French Business Forum, Ambition India, which includes sessions on business environment, project’s financing, HR, attractiveness and sectorial roundtables, networking lunch and B2B meetings. The 2019 edition will take place in Paris on 21st May, at which more than 200 companies, experts, advisors and representatives of government bodies are expected. H.E. Alexandre Ziegler will participate in Ambition India and will also lead a delegation of Indian investors to France in Bordeaux, Paris and Lille the same week.

Business France, the national agency supporting the international development of the French economy, is responsible for fostering export growth of French businesses, as well as promoting and facilitating international investment in France.

Business France has 1,500 personnel, in France and in 58 other countries throughout the world, who work with a network of partners. 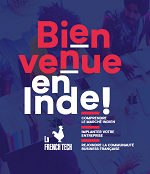