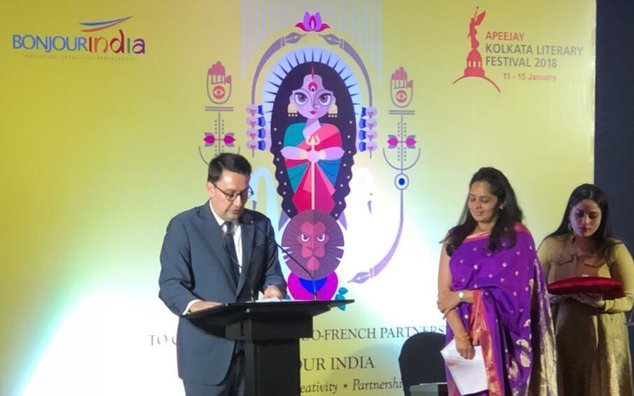 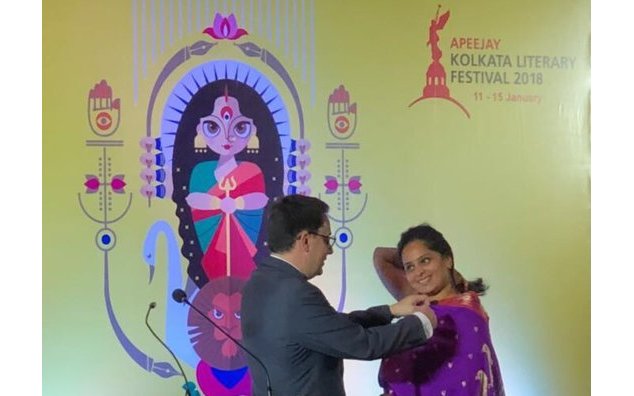 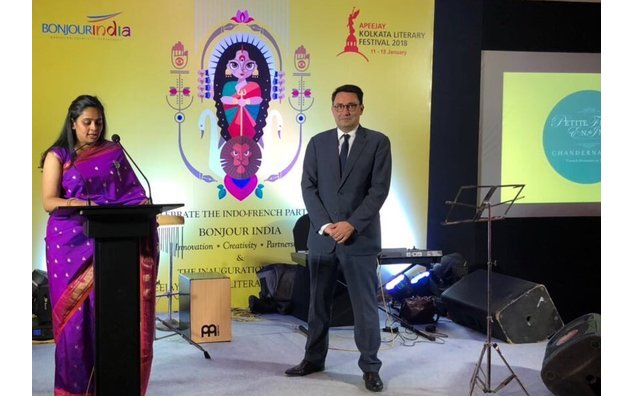 The award comes in recognition of Ms Aishwarya Tipnis’s outstanding commitment to the preservation of French heritage in India.

Indeed, I am truly delighted to be here this evening to celebrate with all of you the accomplishments of Aishwarya Tipnis and to bestow upon her, one of France’s most distinguished titles, that of Chevalier in the French Order of Arts and Letters.

Aishwarya, you are an alumnus of the School of Planning & Architecture of New Delhi. You also have a Master’s Degree in European Urban Conservation. You are the recipient of the Commonwealth Professional Fellowship 2011, Scottish International Scholarship 2006, as well as the Gus Austley Award 2007 and Architectural Heritage Society of Scotland Award 2007. You have also won two UNESCO Asia-Pacific Heritage Award of merit. You have more than a decade of experience in the field of architectural and urban conservation, running your own eponymous architecture firm, and have pioneered several urban conservation and building restoration projects in India. You have authored a book on "Vernacular Traditions in Contemporary Architecture" as well as multiple articles on heritage conservation in leading publications.

But we are here to celebrate tonight you history with France. This history is closely linked to a city of West Bengal, not very far from here, the town of Chandernagor.

Chandernagor is one of the oldest French settlements in India. But while the unique heritage of the former European trading colonies of West Bengal had long been recognized, Chandernagor remained a sleeping beauty, until you, a determined and passionate architect, got interested in it. In 2010, following an invitation to France, you launched a project to study the French heritage in India, supported by the Embassy of France, the Vieilles Maisons de France and late Francis Wacziarg.

Thus began the need to identify and study in detail several dozens of beautiful Indo-European houses. The ultimate goal was to reflect on the need to protect this heritage and to complete its inventory with a tourism enhancement project. And you haven’t stopped here. In 2015, you have conducted a community engagement and digital project known as the “Heritage & People of Chandernagor” where the youth of the town were appointed ‘Citizen Historians’ to help collect oral histories while at the same time creating a global inventory of all the heritage buildings by crowdsourcing memories of Chandernagor from across the world.

This passionate effort has continued in the framework of Bonjour India. This week, you are conducting, in Chandernagor, a 7-day intensive workshop involving French and Indian students of architecture, in connection with the local communities, focusing on the restoration and reuse of a French heritage building, the French Registry Office, which has been renamed by you as “House of the Moon”.

Tomorrow will be the last day of the workshop, and I invite you all to come to Chandernagor to discover their research and creative work in an open-air exhibition on the Strand.

You have also conceptualized a contest mobilizing students from 80 schools, showcasing how heritage can become a source of economic growth and employment. And last but not least, you are now planning a crowd funding campaign in order to finance the renovation of the House of the Moon.

I know, dear Aishwarya, that you will not stop until you achieve our common dream: the complete restoration of the unique Indo-French heritage of Chandernagor.

For all these reasons, I have the honour and the pleasure to bestow upon you today the insignia of Chevalier des Arts et des Lettres, an Order which is one of the most prestigious national order, precisely created to honour people like you, for their outstanding contribution to the influence of the arts and letters in France and in the world.

Aishwarya Tipnis is the principal architect of an eponymous architectural practice based in New Delhi working on making the past relevant to the future through a diversity of projects on architectural and urban heritage conservation in India.

An alumnus of the School of Planning & Architecture New Delhi, she has Masters Degree in European Urban Conservation with distinction from the University of Dundee, Scotland in 2007.

She is recipient of the UNESCO Award for Heritage Conservation in the Asia-Pacific Region (Award of Merit: Mahidpur Fort & Honourable Mention for Doon School, Dehradun) in 2016. She was selected to represent India at the Global Cultural Leadership Programme, First Edition as part of the European Union’s Cultural Diplomacy Platform in 2016.

She has worked extensively on identification of shared built heritage of French in India and has brought about a change in approach to urban heritage conservation due to her pioneering work on Chandernagore. She is also the recipient of Commonwealth Professional Fellowship 2011, Bonjour India Travel Fellowship 2010 as well as Scottish International Scholarship 2006. She has been a consultant to UNESCO, Asian Development Bank, World Monuments Fund New York as well as Vielles Maison Francaise, Paris, Embassy of France in India, Embassy of Kingdom of Netherlands in India.

She is currently part of the UNESCO expert team on the preparation of the CCMP for Darjeeling Himalayan Railway World Heritage Site as well as the consultant to the Doon School, Dehradun on the restoration of their historic buildings. She is visiting faculty at the Department of Urban Design at School of Planning & Architecture New Delhi and the author of "Vernacular Traditions: Contemporary Architecture" published 2012.

The French government distinction Chevalier dans l’Ordre des Arts et des Lettres (Knight of the Order of Arts and Letters) is conferred on “persons who have distinguished themselves by their creativity in the field of art, culture and literature or for their contribution to the influence of arts in France and throughout the world.” Some noted Indian recipients of this honour in the past include the late Sivaji Ganesan, Lata Mangeshkar, Shahrukh Khan, Aishwarya Rai, Raghu Rai, Ebrahim Alkazi, the late Habib Tanveer, Upamanyu Chatterjee, Shaji N. Karun and Subodh Gupta.